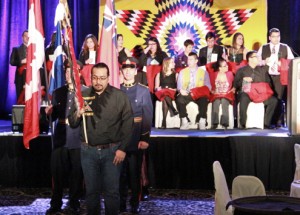 The tribute recognizes the outstanding achievement of Manitoba’s Aboriginal youth who exhibit high standards of excellence, dedication, leadership and accomplishments in the following areas: Academic, Athletic, Artistic, Cultural, Community/Volunteer, Business/Entrepreneurial, Health, Personal Achievement, and Employment in a Traditional Field.  The MAYAA selection process is unique in that recipients are chosen by committees consisting of Aboriginal youth from the community.

In 1994, a group of concerned Winnipeg individuals formed a committee to counteract the growing negative image of Aboriginal youth. They knew of youth in the community who excelled in their activities, and who they felt should be recognized for their achievements. The first annual Aboriginal Youth Achievement Awards was born through this committee's efforts.

The first event was sold out within weeks of the ceremony with 750 in attendance. In 1995, in response to the community at large, the awards were expanded to include all Aboriginal youth within the province, and became the Manitoba Aboriginal Youth Achievement Awards.

The awards continued to grow each year with sold out capacities. Youth participation also increased thanks to corporate and community sponsors. The award categories doubled from 7 awards in 1994 to fourteen in 1995. In 2010, two Health awards were added, for a total of sixteen awards. The event has more than doubled in size since 1994, with record attendance of 1600+ in 1999 and 2000.

The MAYAA Organizing Committee is pleased to present its new logo in celebration of its 20th Anniversary of the Manitoba Aboriginal Youth Achievement Awards. The eagle represents the honour bestowed to the youth for their accomplishments and aspirations as our future generations and leaders. The eagle feather represents the highest honour one can receive, therefore it is embedded in the Y for Youth. The sixteen yellow circles within in the wings of the eagle represent the sixteen awards presented to the youth each year at the Awards. The infinity teaching is never ending and symbol used for the Metis Nation. The earth tones connect us to the Earth our Mother and honour the youth of the Red Nation.

MAYAA is proud to support young Aboriginal entrepreneurs and businesses.